From Particle Wiki
(Redirected from Aplanarity)
Jump to: navigation, search

The sphericity tensor is the basis for calculation of sphericity and aplanarity, two event shape observables particularly suited for

The sphericity tensor is defined as:

are the four-momenta of all particles in an event. Superscript a and b indicates spatial components, and the sphericity tensor can thus be represented as a 3-by-3 matrix. As such, three eigenvalues can be found. If they are ordered as

, the sphericity is defined as:

The similar quantity aplanarity is defined as:

The eigenvector corresponding to

is called the sphericity axis. S measures the amount of

with respect to that axis, and is constrained to values

. An event with sphericity 0 is a clean dijet event, and sphericity 1 signifies an isotropic event.

The eigenvectors corresponding to

spans a plane, the so-called sphericity plane. Aplanarity measures the

out of that plane, is constrained to

. Similarly to S, A is used to signify the isotropicity of the event.

Sphericity is not an infrared safe quantity. Since it is quadratic in particle momenta, its value will change if a particle splits up into two collinear particles. 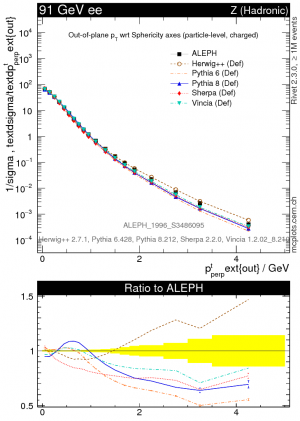 The ALEPH measurement of out of plane transverse momentum, compared to standard event generators. From MCPLOTS.

out of the sphericity plane is a particularly interesting observable, as it has been problematic to describe for all the standard parton shower generators, see e.g. the measurement by ALEPH in the figure.

In the Rivet framework, projections are in place to calculate the sphericity tensor, its eigenvalues and corresponding eigenvectors. Below example code is shown for calculating them all. The example is a full Rivet analysis in itself, which can be compiled with rivet-buildplugin RivetSphericityExample.so SphericityExample.cc --std=c++11. The example just calculates the quantities. One should then fill histograms as needed, etc.